Two days Crete, I wondered if that would be enough to really experience the place? We left on Friday afternoon to arrive around 10 Pm in Heraklion. From there it was still a one hour drive to Rethymnon, where we would stay at the Swell Boutique hotel. The transfer can be done by taxi which costs around 80 euro one way. There is also a bus service from Heraklion to Rethymnon which cost around 8 euro one way, and takes one and a half hour. The bus service is called KTEL and runs services between Heraklion Rethymnon and Chania.  The biggest disadvantage is that this bus leaves from Heraklion city and not from the airport.

We checked in online the day before our flight so that we only had to drop off our luggage at the airport. It keeps surprising me that so little people use the possibility to check-in online. The airline carriers even e-mails you a reminder when you can check-in online. You only have to click on the given link in the reminder message. I have avoided countless cues this way on airports in the last few years. What stops people in times when we are all connected is a mystery to me.
There is another phenomenon that intrigues me on airports. People start queuing at the gate long before airport staff announce the start of boarding. Do people really think the boarding will start earlier if they already stand in line before the gate before the staff actually announces the start of boarding? And from the moment one passenger starts queuing, surely most of the other passengers will follow. Just to stand there getting nervous wondering why it takes so long before boarding starts, while they could have sat down for another 20 minutes! People really are sheep… Maybe I should start a blog on how to behave at airports????

Our plane left 40 minutes late, but arrived at the predicted arrival time. I did the maths and came to the conclusion that Jetairfly adds the recurring delays in their flight time-schedule. Sounds a bit like the NMBS; the train company in Belgium. Because the trains are always late, we just make the scheduled travel time longer. And bang the trains ride on time! Jetairfly probably tries to avoid to many complaints this way!

The climate on Crete is very promising. Around 28 degrees during the day, around 20 to 22 degrees in the evening. I am sure I will love it! The luggage pick up at the Heraklion airport is a bit chaotic, because the information system on the screens is down, and we had to ask staff members walking around for the right belt number.
Our taxi was arranged by my husbands work, and thus waiting for us. (luxury…) When we mentioned the failing luggage screens, he answered they were down for two years already! Symptom of the failing Greek economy?

The transfer from Heraklion airport to Rethymnon took one hour, and went smooth on a decent semi highway road. Since it was after dark already, we couldn’t enjoy the scenery. Although we arrived after eleven PM, it wasn’t too difficult to find a restaurant still open! We chose Pagliaccio, an Italian restaurant, a block away from our hotel, and were not disappointed! We ate a salad, a pasta and a large plate of foccacio bread, a glass of wine and sparkling water for less than 30 euro. And it all tasted great, and was served by very friendly waiters. 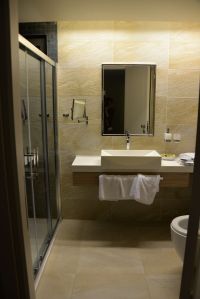 Swell boutique hotel is on the East side of Rethymnon center and a real treat. Beautiful rooms, large beds, beautiful bathrooms with a huge shower, a balcony with seaview and a seating area in the room. Haidryer, complimentary shower gel, shampoo, conditioner ( all based on olive oil), safety deposit box, coffee and tea making facilities, high speed free wifi in the room. The hotel has a (small) swimming pool, a fitness area, and the beach is just across the road. You can get beach or pool towels at the reception area. Breakfast is included and apart from the undrinkable coffee, ( becomes a recurring experience in hotels…) there is a rich choice in foods with many local specialties like Greek yoghurt, dried fruits, bruscettas, avocado, salmon, Greek cheese, fyllo pastries….

We had a great but albeit short sleep, and after breakfast headed out towards the old town of Rethymnon. I did not like the seaside strip East of Rethymnon too much. It is lined with hotels and restaurants. You arrive at the old town by the old port, with a Venetian light house. You enter the old town and are greeted by small though atmospheric cobblestone streets, lined with souvenir shops, restaurants and bars. Everywhere you can buy the signature products: olive oil, honey, ouzo, metaxa, olive oil toilet products and soaps, Greek cheeses, sweets……

We passed the Folklore and History museum on Vernardou street, saw that there was a beautiful central interior courtyard, but decided against buying an entrance ticket. Next to the museum is a traditional baker that makers fyllo dough and threads for sweet fyllo pastries (baklava), which his wife sells. The baker has made it his daily job to bake and be photographed by tourists. It is a bit of a tourist trap, but the old couple is so charming, you take it in stride.

We walked towards the Fortezza and were pleasantly surprised by the fortress’ surroundings. The fortress is high above the old town’s center and has the deep blue sea as backdrop. We were quite thirsty and the café Thalassographia a bit further, with terraces on different levels all overlooking the sea, caught our eye. We chose one of the benches with soft pillows to sink into and lounge with the sound of the waves breaking on the shore beneath us. We ordered a drink, and although not hungry, but it was lunchtime, ordered some fyllo pastries filled with Greek cheese. We stayed quite a while enjoying the relaxing environment and the great sea views. They have free wifi so we tried to figure out what to do the next day. We also decided we should have our dinner here, because of the great location and views and the great food!

We visited the fortress, which dominates the city and was built by the Venetians in 1573 to protect the city. Not too much is still there except for the walls, some remains of the buildings and the mosque, but you have great views over Rethymnon and the sea. The archaeological museum is opposite the entrance of the fortress and open daily from 8.30 to 15.00. Since we had relaxed too long, it was already past opening hours so we did not visit the museum. Close to the harbour is the archaeological museum’s shop housed in the Venetian Loggia dating back to the 16th century. 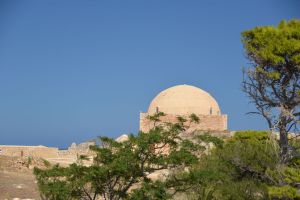 There are some mosques in Rethymnon like the Neratze mosque with the main minaret, the Kara Musa Pasa mosque and the Veli Pasa mosque. Most shops are found on Souliou street and the streets around it.

We jumped in the sea later that afternoon, to cool down in the still warm water. It is a perfect way to freshen up before the evening. All dressed up we walked back to café Thalassographia to have our dinner with some Greek cheese appetizers and a fresh grilled seabass, graciously prepared by the waiter at our table. A sea-breeze and a view of the sea and the starry sky made it a perfectly romantic dinner. 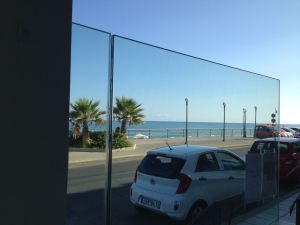 We had booked a rental car for the next day, because we wanted to see some of the interior of Crete. The car would also be a cheap alternative for the taxi back to the airport in the evening. A car for 24 hours costs only 45 euro compared to a taxi to the airport which would cost 80 euro! After our breakfast we headed in the direction of Heraklion, and took a right in the direction of the Eastern Othodox Arkadi monastery. Not alone is the monastery really beautiful, it is famous for its rebellion against the Turks in 1866.

From the monastery we continued our way in the direction of Patsos, and just before Patsos, rejoined the road in the direction of Rethymnon. A bit further on your right you will see a sign that leads to Saint-Anthony’s gorge (or Patsos gorge) and cave church. The gorge is one of the smaller gorges on Crete, with the Samaria gorge on the South-West of the island being the most famous. You can walk through the gorge in an hour or two or three (it is about 5 km long). Best to wear decent walking shoes, and since we had forgotten to take those with us, we walked only the first 500m in to the gorge, passing the famous church dedicated to Saint Anthony. Beware, there is no lake anymore at the end of the gorge since the river has been dammed of by the Amari dam.

After returning to Rethymnon we took our lunch at the Italian Pagliaccio restaurant again. We did not regret our choice of a salad with focaccio bread. 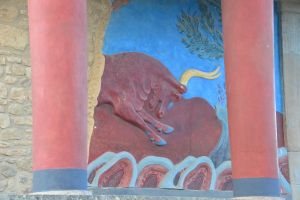 We then headed to Heraklion, and once we reached the outskirts of Heraklion took a right in the direction of Knossos. Knossos is the largest palace of the preserved Minoan centres, dating back to 1900 B.C. The area was already inhabited during the Neolithic period, 6000 B.C. The palace is connected to the legend of King Minos, with the Labyrinth and the Minotaur. The site was discovered in 1878 by Minos Kalokairinos, and excavations started in 1900 by the English archaeologist Sir Arthur Evans continuing for a period of 35 years. The palace had four wings arranged around a central courtyard, containing the royal quarters, workshops, shrines, storerooms, repositories, the throne room and banquet halls dated 2000 – 1350 B.C. The entrance ticket costs 6 euro. The site is really impressive especially since it is so old, and quite well preserved. The reconstructions done by Evans, although contested, give a great insight in how the palace must have looked, and one is impressed by the advanced architecture of those times. The legend of the Minotaur also speaks to ones imagination. The site was open till 8 pm so we had ample time to visit the site. 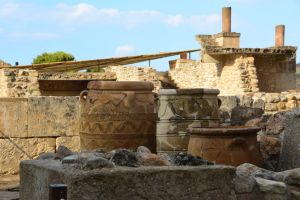 You can take a guide, or buy a guidebook in one of the stalls at the entrance to guide you through.

We then headed to Heraklion to get a light dinner, and decided to try the Venetian Port with the fortress of Koules. The port is very attractive for a walk and we ended up at Xenias square were we took a table at the Mare Coffee Bar and Food, a popular spot at the edge of the sea. One advice: share your food, the plates are huge, we both took a club sandwich and could only finish half of our plates. Do not eat fish since it is mentioned on the menu that all fish and seafood comes out of the freezer…. (but they are honest about it!). It was a great way to finish our weekend on Crete!

On the return flight by Jetairfly we did not get any drinks or food for free, but we did get a complementary free mini bottle of Metaxa, an alcoholic drink. I would have preferred a complimentary bottle of water instead! If you ask you can get a small glass of water, but many people are unaware that a glass of water is free and don’t dare to ask for it, convinced you have to pay for it like for everything else!