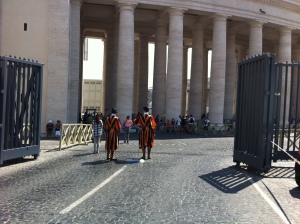 For this day we had booked the Scavi tour, which is a pre-booked visit under the Saint Peter’s basilica, were archeologists have uncovered part of the Pre-Roman necropolis (city of the dead). It is a burial ground, that was covered for the construction of the church by emperor Constantine. 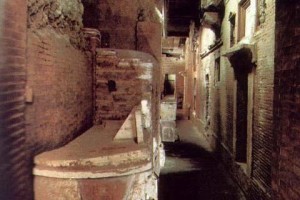 Archeologists were allowed to dig there because it was thought that the remains of Saint Peter were under the church, since the church was built on his tomb. Saint-Peter was crucified upside down, and worshipped a martyr by Christians. Archeologists found his tomb empty though, and eventually found his remains a bit further in a poor man’s grave. It is believed the remains were moved there to protect them from the anti-Christian persecutions. After being found, the remains disappeared for a few centuries, taken by a priest after they were found, and retrieved in the sixties. They where then examined, and attributed to a man in his sixties, believed to be Saint Peter. The church allowed the uncovering of some part of the Necropolis, even though they were pagan graves. During the visit you walk 12 meters along these graves, which are wonderfully well preserved and tell a lot about the life of the people buried here. You end at the grave of Saint Peter and even see part of his skeleton! The altar of the basilica is right on top of Saint Peter’s bones. 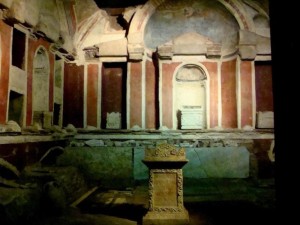 After the one and a half hour tour by a church historian, you end up in the grotto of Saint Peter where you can visit the rest of the basilica, skipping the lines entirely! It is another great way of entering the basilica without having to stand in line, and a very privileged one. The tour is really not very expensive: 13 euro per person, but you have to book well in advance by mailing to uff.scavi@fabricsp.va. You give up the days you visit Rome, and they mail you the date and time you can visit, and mode of payment. The rules are strict, everyone must be older than 15, you must dress properly ( shoulders and knees covered), you cannot bring large bags, and you cannot take photographs. You enter by passing the Swiss Guards on the left side of the basilica ( at the end of the row of columns), where policemen check your bags. The guards point you to the office,on the right side of the square you enter, here you show your booking. Only 12 people can join the tour at one time. The isles of the site are very narrow. There is a constant temperature, and a humidity level of 90%, which is a lot, and can feel a bit stifling. But you get so much information during this one and a half hour, it makes your visitor the basilica upstairs so much more interesting. Only 200 to 250 people are allowed in the necropolis, compared to 30.000 people visiting the basilica on top of if every day! At the end of the tour you enter the Saint Peter’s basilica by the grotto where past popes are buried, and you enter the basilica avoiding the usual long queues. 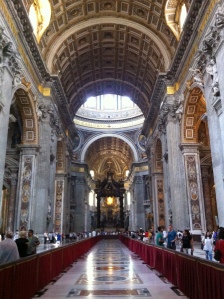 We visited the grottos and the church with its impressive mosaic decorations, even the paintings are actually mosaics! ( look closer) . The big altarpiece by Bernini is made from the bronze taken from the cassette ceiling in the Pantheon. The gold used in the small chapel above Saint Peters grave is the first American gold that was brought to Europe! The wealth piled up here is enormous. 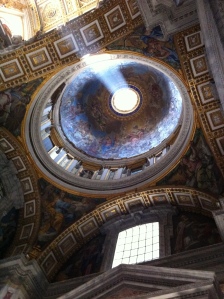 In the right part of the church stands the Pieta by Michelangelo, behind glass, after an attack on the statue in the seventies. It is a very moving and romantic statue of Maria holding the body of Christ. 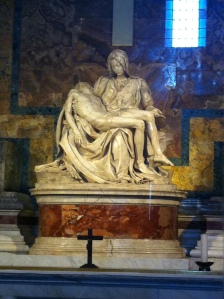 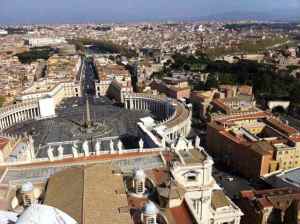 But in any other circumstance do visit the cupola, it is really worth it! But do take the lift, the climb is too long, and even then you still have to climb up the last part. But you get a real close look at the mosaics of the cupola and get a beautiful view of Rome as a bonus.
Instead we decided to visit the San Clemente basilica behind the Collosseum. 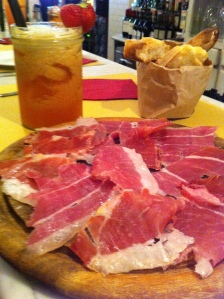 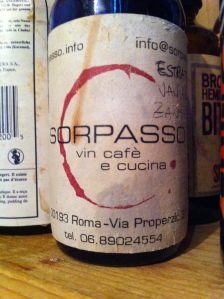 We stopped for a drink in Sorpasso, a wine bar on via Properzio, close to the Vatican, where we took an aperitivo and some cheese and ham. We wanted to book a table for the evening but everything was taken. We tried by walking in in the evening, but the place is obviously a hip place, and the bar and outside terrace was filled with people coming from work taking the aperitivo. We took the metro from Ottaviano to Colosseo, on exiting, turned left. 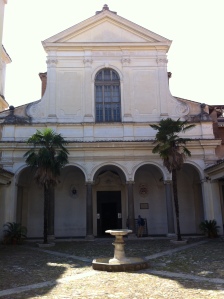 The San Clemente basilica is one block further on via Labicana, open: 9-12u30 en 15-18u: 5 en 3,5 euro for the entrance tickets. The church is in fact three churches built on top of each other. 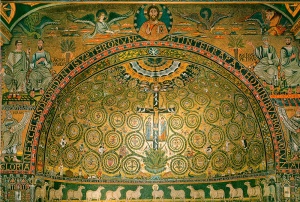 You enter a twelfth century basilica, and then descend into the older parts that are excavated. 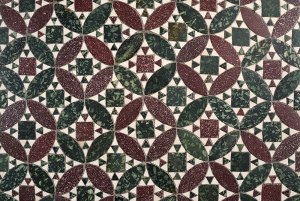 The first level down is a Basilica of the fourth century and on the lowest level you discover a Mitrian (pagan) temple from the first century, where the sun god was worshipped. There are beautiful frescoes uncovered on the middle level in the fourth century basilica. 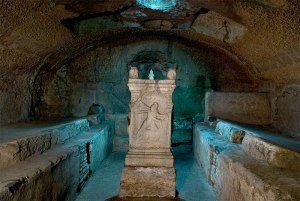 On the way back to our B&B we stepped out of the metro at the Spanish steps. Because of the heat no one was sitting on the steps, everyone was sitting around the fountain in the shadow. 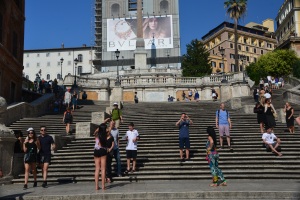 We walked towards the Trevi fountain, making a stop at San Crispino in Via della Panetteria 42 for an ice- cream. 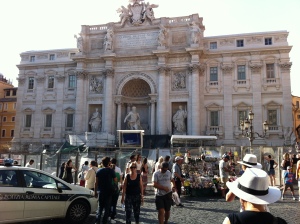 The Trevi fountain was a huge disappointment. After the passage of a bunch of football hooligans in May this year, who managed to really damage the fountain, it was dry, and mostly covered for restoration, with large plastic panels around it. 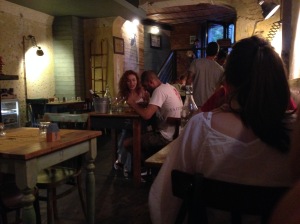 We returned to Ottaviano and had dinner close to our B&B at Ristorante Porto, a fish and chips restaurant, where you can also eat pasta and salads and other fish and seafood dishes. The place is very popular with locals. ( Via Crescenzio 56, 00193, Roma )

One thought on “Saint Peter’s basilica and San Clemente basilica”

The light was just perfect on our evening walk in the nature reserve of Damme, near Bruges. We spotted many different bird species. The warm weather of the last days created a lush carpets of flowers. @staddamme @natuurpunt @visit_damme @westtoer
My work ‘The ripple effect’ was part of the exhibition ‘Air Biekorf 5.0’ from April 23rd till May 30th in Bruges this year. Linocut and calligraphy on watercolor paper. @ccbrugge
A special view from the installation of Brazilian artist Hector Zamora around a huge old giant, an Austrian pine, in the garden of the Gezellehouse, for the Triennial 2021 in Bruges. This work is a clash of the industrial with the natural world. From the top you get a wonderful view of the skyline of Bruges. No hurry, the Triennial still runs daily till October 24th. @triennalebrugge @visitbruges
A beautiful exhibition by Brussels self-taught artist Sanam Khatibi in the Groeningemuseum in Bruges. Her works have a dreamy atmosphere and are feminine and powerful at the same time. And even though they are filled with references to death and decay they are all aesthetically beautiful and are soothing to the eye. The small still-lives communicate a sense of serenity, the light and colors are lively against the pitch black back drop. The exhibition transports you into the world of the painter filled with objects from her Wunderkammer. Some of these objects are on display in the beautiful neo-gothic cabinet that used to hold the Ursulashrine by Hans Memling. The exhibition ‘Lemon Drizzle’ runs until October 3rd. @museabrugge @untilthelilacsturnblack @stadbrugge @visitbruges @rodolphejanssen
Sneak preview into the Triennale 2021 that will start May 8th in Bruges and will run until October 24th. Fabrics from Vietnam and Thailand made by Hmong, Dzao, Isaan and Northern Thai women and brought with me to my home in Bruges are integrated into this art installation by American artist Amanda Browder. It connects women from three continents and can be admired by everyone visiting Bruges this summer. Will we see you here? @triennalebrugge @browdertown @visitbruges @stadbrugge @bruggeplus.be
Sneak peek into the Triennial 2021 in Bruges. This work, Banisteria Campo by Henrique Oliveira blends almost seamlessly into its surroundings. Many will walk by and miss this installation over one of the only remains of the first ramparts of Bruges, dating back to the first quarter of the 12th century, thinking it is a living organism that must have grown here over the tower. From May 8th till October 24th you can discover thirteen artistic and architectural interventions in the city centre by national an international artists around this years theme Traum/Trauma. @triennalebrugge @visitbruges @museabrugge @stadbrugge @henriqueoliveira.studio