This fall we visited Madrid on a weekend, and this already for the second time. First time was in the winter of 2011, in March. I really loved Madrid back then, and I enjoyed it just as much this time round. I prefer Madrid over Barcelona. Barcelona is too touristy to my liking. Though you should see the works of Antoni Gaudi and the Sagrada Familia at least once! Barcelona asks for good weather to enjoy the seaside, while Madrid is just as enjoyable in winter. Last time we had rented an appartement via Friendly Rentals (in the pre-AirBnB period), but today that appartement in the Malasana area is not for rent anymore. We wanted to find a hotel this time, centrally located. We eventually fell for the four star Hotel Iberostar Las Letras, located on Gran Via, more central than that is impossible.

The hotel has beautifully decorated rooms with high ceilings and large windows and quotations from writers, poets and philosophers on the walls throughout the hotel.

The hotel boasts a great lounge and very good restaurant, popular with guests and non-guests alike, creating a buzzy vibe. Paco Morales, one of the best young chefs in Spain, is in charge of the Altrapo restaurant and also oversees breakfast, the bar menu and room service. The food is miles better than most four-star hotels – or even five-star hotels for that matter. 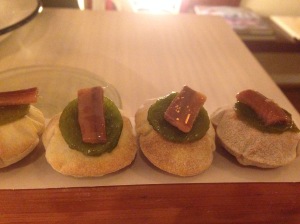 We had dinner on the second evening in the Altrapo restaurant and it was fabulous, the food is very sophisticated indeed. Try the tortilla pillows and the tomatoes wrapped in an anchovy membrane on minty crumbs. We had iberico pig and duck as main course, and both were prepared perfectly.

We rounded of with two desserts to share, coffee and tea and clocked off on 80 euros for two people.

In the summer you can enjoy the bar on the rooftop with sweeping views of the city. We had a cocktail in the lounge bar which was a real treat after fleeing the huge crowds of shoppers in the city. The hotel is located behind one of the listed neoclassical façades on the Gran Via, the main avenue through the centre of the city. You can walk to the major museums, and there are tons of shops, restaurants and tapas-bars within a one-mile radius. We paid 128 euro per night for a standard double room, breakfast not included. 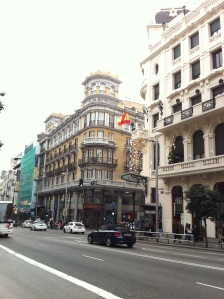 From the airport we took the high speed train (run by Renfe) into the city. It costs only 2,60 euro per person, and takes you in 18 minutes to Nuevos Ministerios, from where we took the metro to Gran Via.  You need some perseverance to take the Renfe and not the metro from the airport into the centre. They are both located on level -1 in the airport, and you first have to pass the metro information and selling booth, and a whole row of metro ticketing machines, before you see a small selling office on the right end of the hall where you can get information and buy tickets for the train. The metro vending machines do not sell train tickets and on the Renfe ticketing machines it is almost impossible to find how to get  a ticket for the train (Renfe line C1) into the city. After some frustrating attempts on the vending machines our eye finally fell on the selling office for the Renfe.  To reach Gran Via, its best to get of the train at the metro stop Nuevos Ministerios, and then take the metro (line 10) to Tribunal and change to line 1 and get off at Gran Via. The metro stop is one block away from the hotel.

After dropping of our luggage we made a walk to the centre, heading for Chocolateria San Gines for some traditional Chocolate and Churros (Passage San Ginés, 11). We ordered a plate of six churros and a cup of liquid chocolate to dip the churros, accompanied by a coffee.

After this sweet treat we continued in the direction of the main square (Plaza Mayor)  to Mercado de San Miguel. A good destination if you are hungry or thirsty since you will surely find something to your liking between the stalls filled with seafood, tapas, ham, oysters, fruit, sweets, accompanied with a glass of Spanish wine, sangria, champagne, a cocktail or a mocktail.

After walking via the popular square Puerta del Sol we headed back to the hotel for a small siesta.  For dinner we headed north of Gran Via to the area of Chueca, where you will have a hard time choosing between the many restaurants and tapas bars.

We eventually chose a table at Taberna La Carmencita ( Calle Libertad, 16) drawn in by the lovely country like decoration with traditional tiles and wooden tables and chairs. The menu contains mainly traditional country-style dishes, with a focus on good-quality ingredients. 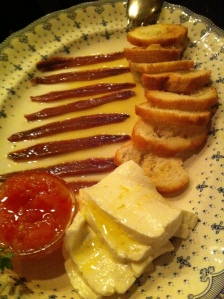 We shared two appetizers: one plate with tomatoes, cheese and anchovy, and a second plate with (huge) mussels. We both had the traditional lamb stew and skipped dessert, rounding of with a coffee and tea. The food was very tasty and the welcome very warm.

We headed to bed early since we had been up since four thirty that morning. 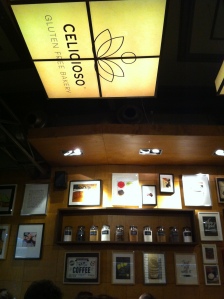 We slept in and after a refreshing shower, headed out for breakfast (after checking Tripadvisor), to Celicioso (calle Hortaleza 3). We were lucky enough to get a table, and had breakfast with two plates of tostado, one with butter and jam and the other with olive oil and tomatoes. Simple but very delicious. We took a slice of carrot cake which tasted wonderful together with our cappuccino. Do not expect to get a classic breakfast here, but the products are really very good, though mostly sweet (cupcakes, pastries and cookies), but they also have a small choice of toast and sandwiches. (and everything is gluten free)

We had visited the Prado museum and Reina Sofia on our previous visit to Madrid. I highly recommend both museums, they have an outstanding collection.

This time there was a temporary exhibition on Wassily Kandinsky in the CentroCentro in Palacio de Cibelis on Plaza de Cibeles, just a few minutes on foot from the hotel.

We bought a ticket, walked in, and then had to wait in line, since visitors were let in in groups of about 30 at a time, to make sure the exhibition did not get overcrowded. 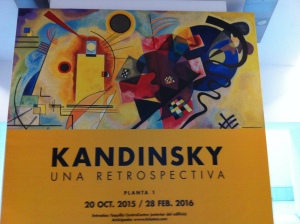 The exhibition was well done, and accompanied by an excellent audio-guide. The palacio itself is also worth a visit, and you can take a ticket for the view over Madrid from the top of the tower.

It was getting close to 3 PM and we were getting hungry having skipped lunch. We headed back to Chueca, to a tapas bar we had passed the previous evening which looked really cosy. We  entered Celso y Manolo (Calle Libertad, 1), and asked for a table. They asked us to wait a little bit, so we took a seat at the bar. We asked the bar tender what was the drink everyone ordered, and it turned out to be Vermouth. We asked for another cocktail, but at this hour of the day, the only cocktail you could order was a vermouth, served in a martini glass with orange, cherry, olive and lemon. The ruby red small-batch artisan vermouth made in the mountains of Tarragona has such smooth and complex flavors that you could certainly be fooled into thinking it was a cocktail if you didn’t know better. We got a table, ordered some tapas, and first ordered a glass of wine not sure if vermouth was what we liked.

People kept entering the bar, all of them ordering a vermouth, accompanied by some tapas. Becoming curious we ended op ordering a vermouth ourselves, and were pleasantly surprised. Some research online learned us that in Spain, and especially in Madrid there is an age old tradition called “La Hora del vermut”, the hour of vermouth. It is an acceptable excuse for day drinking, and one which many Spaniards would argue is actually good for you. Going for a vermouth is also an excuse to snack before you sit down for the day’s primary meal.

With alcohol concentrations around 15%, it’s probably a good idea to eat something with your vermouth. We ordered empanadillas (filled pastries), some squid and some potato salad with anchovy, with bread, all very tasty and freshly made. This had filled us up so we decided to use the rest of the afternoon to do some shopping.

We went to Calle Fuencarril, which starts at the intersection of Gran Via and runs north to Metro Bilbao, to find the best shops in Madrid. We eventually ended up in Corte Ingles, one of  the best department store of Spain. By that time the streets were filled with Christmas shoppers, and we escaped the crowds for a cocktail at the lounge bar of our hotel.

On our last day we took our breakfast at cafetaria Nebraska (calle de Alcala, 18) and then headed out to the The Thyssen-Bornemisza Museum for the temporary exhibition on Edvard Munch. 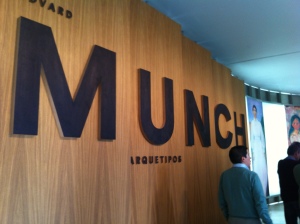 The tickets are sold in slots of 30 minutes, so we had to wait about 40 minutes before entering the museum, and decided to enjoy the winter sun first followed by a coffee at the cafeteria of the museum. The exhibition was well done, but the audio guide let us down this time, not worth it actually!

To end the weekend in style, we decided to go out for another vermouth, this time at Mercado de la Reina on Gran Via, a popular spot.

We ordered some tapas of iberico ham, some squid and some croquetas with ham, to accompany a large glass of vermouth. We picked up our luggage and took the metro to Nuevos Ministerios, and from there the Renfe train to the airport. You have to watch out, because there are different lines running in the direction of the Airport, and you have to get on line C1, to the airport T4 (for terminal 4).

Some extra tips for Madrid: 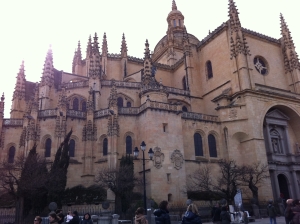 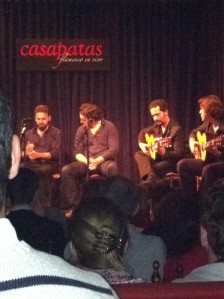