This was my second visit to Berlin. Last time I was here was in 2013. At that time I visited all the usual suspects: East-Side gallery, Holocaust memorial and museum, the Reichstag, the Pergamon museum on Museuminsel, Hackeschen Höfe, Unter den Linden, Gendarmenmarkt, Checkpoint Charlie, Potsdamer Platz, the Tiergarten, Brandenburger Tor, the Neue Wache and KaDeWe. We did all that in just three days, arriving on Friday and leaving on Monday, a really busy program! This time we also stayed from Friday till Monday, but I was planning to take a more relaxed approach this second time around. 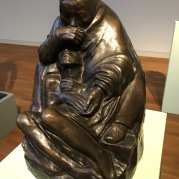 Just as last time we stayed at the Scandic hotel near Potsdamer Platz, because it is close to the offices where my husbands works. I do not mind, it is a very comfortably hotel, conveniently located close to a metro stop and with a wonderful breakfast included. 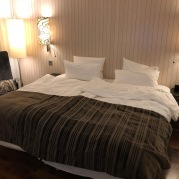 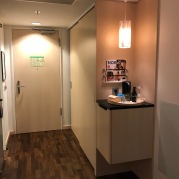 We arrived in the hotel by noon, and decided to take a quick lunch in the shopping mall just in front of the hotel. We chose Asian food. A good bowl of noodles with crispy duck breast tastes good on any day.

I the afternoon I wanted to visit the Kathe Kollwitz museum. I took the metro just 50m away from the hotel, from the metro stop U Mendelssohn-Bartholdy-Park. Here I took one stop on the line U2 to Gleisdreieck and from there the line U1 up to the last stop U. Uhlandstrasse. From there you walk 250 m to the museum. Each metro station has an automat where you can buy metro tickets. You can buy them per piece, but it is cheaper if you buy four at a time. Since seeing Kathe Kollwitz’ statue in the Neue Wache last time, I wanted to visit her museum. The Neue Wache is a Central Memorial of the Federal Republic of Germany for the Victims of War and Dictatorship at Unter den Linden. Kathe Kollwitz lost her son who was a soldier during the First World War and made this statue in his memory. The statue ‘Mother with her Dead Son‘ is inspired by the Pieta, a famous statue by Michelangelo in the St. Peter’s Basilica in Rome, depicting the Virgin Mary cradling the dead body of Jesus, also one of my favorite statues.

Kathe Kollwitz’ museum tells the story of the artists’ life. She was born in East Prussia, married to a medical doctor, lived in the poorer area of Berlin, had two sons and was a socially engaged woman who tried to counter war and poverty through her art. At the start of her career she mostly makes drawings, after which she turns to printing art (etching and wood cut), and later turns to sculpture. “If I could live my life again, I would be a sculptor and nothing else”. This confession shows her love for the medium sculpture. Her works are exhibited on the first till third floor. I was here on a Friday, and the museum was very quiet, only a few other people were also visiting. I definitely have to see the sculptures she made for the last resting place of het son in Vladslo Belgium: ‘Mourning Parents’.

Just next to the museum is the Literatur Haus Berlin, a beautiful café with orangerie, a perfect place for tea or coffee and a piece of pie. I sat down with a newspaper, and had tea with cheesecake.

I walked via the Kurfurstendamm, a fancy shopping street, to the conceptstore Paper and Tea on Bleibtreustrasse, to buy some herbal tea. The store is really nice, but the tea is quite expensive. I returned to my hotel by U-bahn, and got a salad at the mall to enjoy with a tea in my hotel room.

The next day we visited the Museum Berggruen opposite the impressive Charlottenburg palace, a rococo Palace – once a royal summer residence, today Berlin’s largest and most magnificent palace. We took the U-bahn U2 from U Mendelssohn-Bartholdy-Park, to Bismarckstrasse and then the U7 to Richard-Wagner Platz. From there it is a ten minute walk to the Heinz Berggruen museum. Heinz Berggruen’s collection, an avid art collector, shows pieces by Picasso, Klee, Matisse, Braque and Giacometti. The core exhibition entitled ‘Picasso and his Times’ dedicates three floors to his painting, sculpture and drawings. 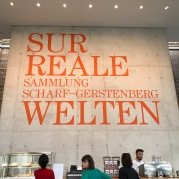 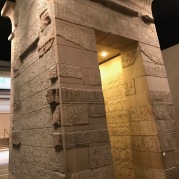 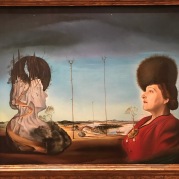 The ticket also gives entrance to the Scharf-Gerstenberg Collection on the other side of the street where you can also have a drink in the museums’ café. The collection mainly has graphic work by Goya, Manet, Piranesi, besides paintings by Dali, Ernst and Magritte. But I was in general less charmed by this collection. Impressive is the Kalabsha Gate and the columns from the ancient Sahure Temple, both owned by the Egyptian Museum, which are  on display in the Scharf-Gerstenberg Museum until the completion of the Pergamon Museum’s fourth exhibition wing.

In the evening we had dinner at Panama restaurant, a ten minute walk from our hotel. The food was very good, but the restaurant itself was quite noisy and quite pricy, and less charming than we had hoped. The service is excellent. Panama is one of the trendy new restaurants of the moment in Berlin.

On our third day, a Sunday, we walked to the Jewish museum, a museum I was really looking forward too. My son had visited it twice already and had been impressed. We arrived a bit before noon, when the museum was not very busy yet. The large grey building, made out of concrete and clad in zinc sheeting, commemorates the numerous lives lost in the holocaust. ‘How long would it take to recite the names of the 6 million people that died?’ was a question Libeskind asked himself when he tried to figure out how to communicate the scale of this genocide in the museum. Instead of portraying the dead he decided to portrey the emptiness left in German society by murdering so many jews.  The building is for the most part empty and is built around three axes. In te afternoon the museum suddenly became very busy, so I advise you to come early to enjoy the museum at its best. I wrote a blog only on this museum: you can read it following this link.

That evening we took the U-banh to the Zoologischer Garten. We had booked a table at Neni, another very trendy restaurant, with the popular Monkey Bar on the same floor. This place really stole my heart. The view over Berlin is fantastic, and the food is not as pricy as in Panama, but definitely very good. It is mainly Middle Eastern food, which we both love. Take small portions when ordering a main after some mezzes, the portions are really large. They also have great homemade lemonade and tea.

On my last day I visited the Neue Wache again and did some window shopping at the Hackeschen Höfe, where you find many new concept stores. 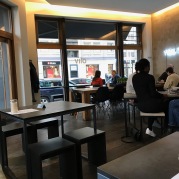 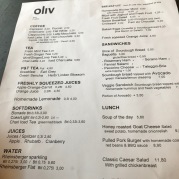 I had lunch at Oliv, close to Alexander Platz. I took a veggie sandwich, served with lots of fresh vegetables. I still love Berlin, as I did on my first visit. So many museums to visit, so many great restaurants and bars. Berlin is a lively place except on a Sunday, when suddenly Berlin seems to have fallen asleep. Sundays should be reserved for a long brunch and a visit to a museum in Winter or a flea market in Summer.